It is the evening of the day…..we’re all set to go out and play!

Well it’s 9:00pm as I start this final countdown blog and we will be setting out in just 12 hours from now (less by the time I’ve finished this!).

We investigated usng CL’s, CS’s, Pub sites, etc.  to accommodate us over the next 2 weeks or so until we head over the channel to France. The plan is to use aires and ‘off-grid’ spots as much as possible once we’re on the continent with perhaps occasional visits to the established campsites (if we feel that we need a ‘fix’ of full-on camper support facilities).

Dismayed at the disjointed methods of searching for suitable sites in the UK (too many different sources to ‘explore’ and none as comprehensive as the ‘all the aires’ books on France/Spain/Portugal), we decided to push the boat out and book the larger, established, UK camp sites to launch ourselves into our future as retiree adventurers. Staying on these sites will cost us more but it will only be for a couple of weeks and the backdrops of the sites we have chosen will hopefully justify their selection and serve to get us into the mood for all that is before us.

Theories and reality aren’t the best of bedfellows but planning for good places should give at least SOME good places and it will hopefully save us from feeling like some type of trucker (albeit slightly better equipped). I’m not being snobbish! Theres’s nothing wrong with truckers! – it’s just that we’re not ‘hauling’ for a living, we’re LIVING FULL-TIME on the road in a motorhome and we’re seeking out retirement adventures that are within our grasp. Places where we can dine, drink, chill, walk and cycle – all in locations that inspire us and touch that sense that says “Good here, isn’t it?”.

Only time will tell if we’ve made the right move and the start of that time is UPON US!

Our first campsite will be a stopover en-route to visiting my Uncle Terry, I say Uncle but he’s only about 6 years older than me and I know it p*&&$& him off when I call him Uncle! If my memory is accurate (which it mostly isn’t!), I think that it will be Terry’s birthday when we see him; I just hope he’s slowed down a bit because the man doesn’t exist on this planet that can out-drink Terry! Go easy on me, Tel!

We’ll spend a couple of nights near Terry before we head down to the south coast (providing my head doesn’t hurt too much!) and then turn left towards Folkestone.

The final 2 days have been a bit of a whirlwind for me, I’m sure that anyone 10 minutes or more younger than me would have taken it all in their stride but there comes a time when it takes a little longer to complete tasks. I’m still a long way from stop though!

Yesterday morning kicked off with the usual MoHo chores (water in/out, toilet out, dog duties, etc.), followed by recording the accumulated sales and purchase invoices for the ‘on-hold’ business, produce the VAT quarter-end and log on to HMRC to file the same.

That was followed by a farewell visit from our friend Mel:

Mel stopped by to say ‘bon voyage’ on his way to Doncaster on a business visit;

Mel’s been caught in the ‘you cannot retire until you are 66’ new retirement rules trap, at least you get a nice new Volvo every few months for the next %$£ years Mel – there’s always a positive!

Once Mel left we hightailed it over to our new Accountants to deposit the accounts for the year-to-date and set things up to run smoothly whilst we’re away. I met with Linda expecting a meeting that would last about an hour but Linda was ‘on it’ and completed the formalities in less than 15 minutes. We have a good feeling that we have chosen well here; work will commence very soon on building our pension ‘kick’ but it will be based on a business that we master (and not the other way round as it was for the last 6 years!.

If we fall out of love with the MoHo, we could get a canal boat and visit our accountants office which is on the right in this picture.

Leaving Linda’s office we then traipsed over for a final visit to the ‘virtual’ office that we have used for the business these last few years.

Amanda collects the ‘last post’ from our virtual office.

Once completed it was time to head over to the new house that Ed and Nicole were completing on; we expected to see them busying themselves with moving and settling in duties, instead we arrived at a ‘no one home’ property, we decided to get a picture of the new house before heading over to say our farewells to Will, Ed and Nicole. 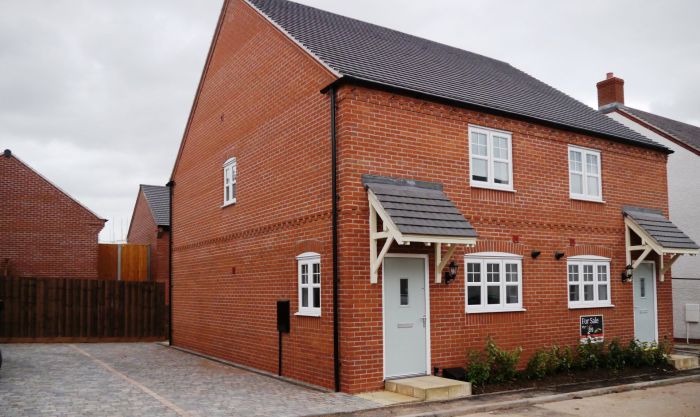 Ed and Nicole’s new gaff. Will will (Will will?) also be resdient her. You may be asking “Will will, will he?”.

We were about to depart and, lo and behold, Ed and Nicole arrived (in their separate cars) and told us that the site manager was about to meet them and hand over the keys to their first-ever house purchase!

Camera at the ready! 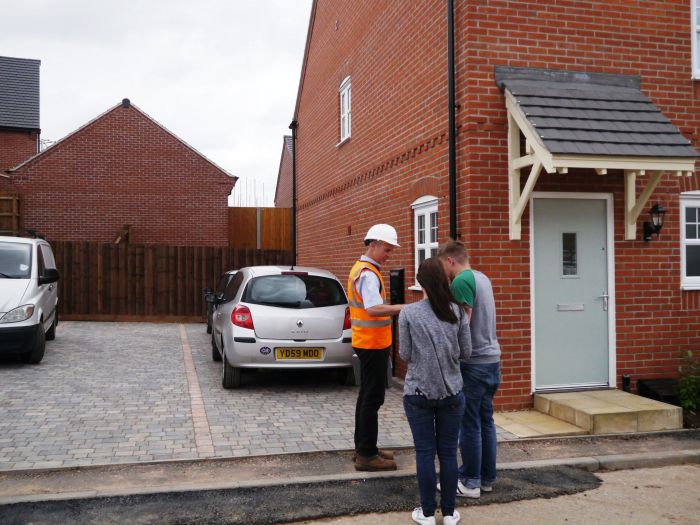 The site manager hands over the keys to Ed and Nicole

Mortgage, council tax, water rates, electricity bill, gas bill, home insurance, new house fit-out costs and still they smile! You’ll learn my son! In the meantime, congratulations and we hope you have many happy times there. Now get back to school, you have bills to pay!

Tilley and Shakey  were suitably impressed…. 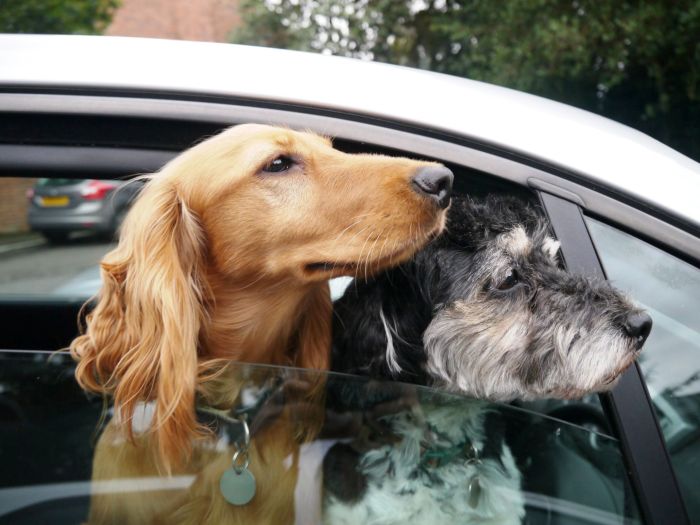 Tilley: “Shakes, does that smell like a house to you?”
Shakey: “Looks like one but the humans I know have put wheels under theirs”

With a reminder of how we started out many years ago fresh in our heads we left Ed and Nicole to drive over and say our farwells to son Will; we swung by the recycling centre to deposit the skeletons of a couple of desk top computers and  then dropped in to see Will. 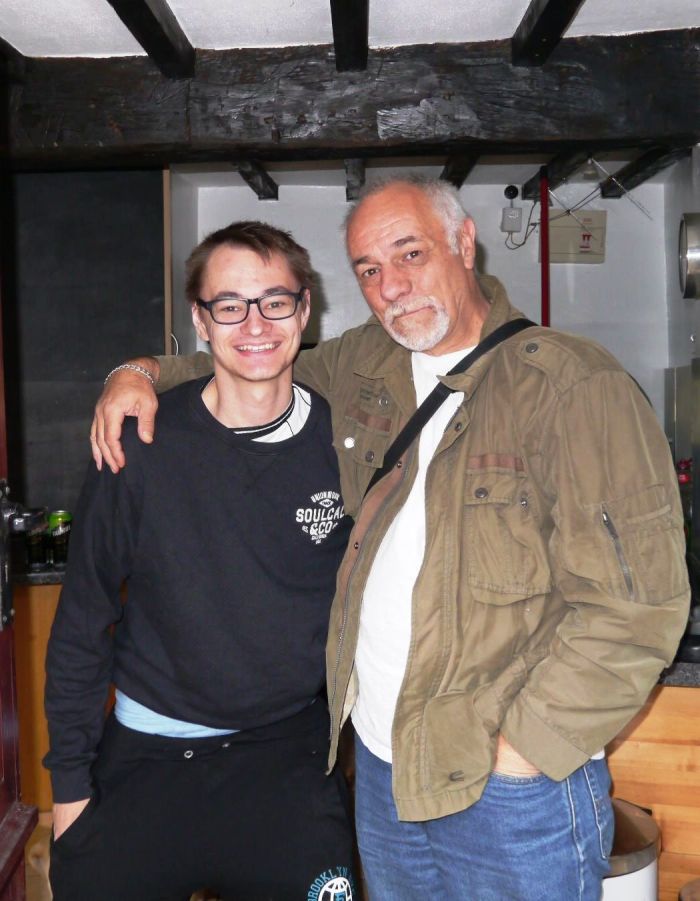 I made the litlle bugger bend his knees! – gonna miss you my boy.

This does seem like a busy day and it wasn’t over!

Amanda with her Ma and da and brother, Jonathan in the background.

Maureen fixed us coffee/tea and after a somewhat emotional farewell, we left as we had a dinner date with my sister, Jill and b-i-l Martin.

We were 5 minutes late!

Martin forced ice cream on me – we still have a weekly weigh-in and we’re both still between 13st 9lbs and 14st 1lb – not saying who is the lowest – that would be bragging!

Thanks Jill and Martin – we’ll see you in a little under 3 months time in Salobrena, roadkill good for you both?

We left to walk down the lane with our 2 dogs wandering somewhere in the dark – it was pitch black!

After stumbling back into Twernt, Amanda quickly retired to bed whilst I checked out Derby’s cup result against Charlton, the team that had beaten us 3-2 in the league. 1-0 to Derby!

Not looking good for van Gaal.

Good end to a good day for us Rams fans though.

Today was ear-marked to do final preps with Twernt – wash Twernt, empty garage, discard stuff not deemed needed/wanted, fix cycles on the tow-mount rack and remove the levels and chocks ready to leave by 0900 hoours tomorrow.

First there was the small matter of visiting Derby’s NHS vampire centre for a reverse injection and then we spent the day getting those named chores done.

I do like to see well cared for vehicles and Richard and Sue’s Coachman VIP is absolutely immaculate, every part of it is like viewing a showroom caravan. Very nice.

Richard also gave me some education on how to use some of the features available on my ‘new-to-me’ Panasonic Lumix GX1X camera. Richard is a keen photographer and is very knowledgeable. Thanks Richard, I got some good pointers and I’m now getting jpegs instead of Raw images!

This has taken me way longer than anticipated to complete so, with 9.5 hours until we leave, I’ll bid you goodnight. It’s going be a better than good day tomorrow!